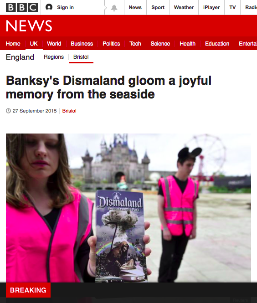 The Impact of Banksy's Dismaland

I commented for two online news pieces which BBC News ran about the social and economic impact of Banksy's 'Dismaland Bemusement Park' when it closed, at the end of September 2015.

Q. How did you rate Dismaland?

A. I heard a rumour about Banksy using the Tropicana site a few months ago and was excited to see whether it would happen. Artist friends went to the opening and reported feeling incredibly moved by some of what they'd seen - they came back feeling that it was time for their own art to get political.

The work was both reflective of the worst sociopolitical atrocities we are living through, e.g. the refugee crisis, illustrated in Banksy's 'Mediterranean Boat Ride', and audacious in its message and production, e.g. Banksy's 'Cinderella's Castle', the artist's grim reminder to us that as consumers of popular media, we were all complicit in Diana's death. Banksy is the street art king of meaning."

Q. What legacy for Weston-super-Mare?

A. I think Dismaland will definitely help to put WSM on the map, at a crucial stage in the town's development. Whether the legacy will be an artistic one I am not sure, but from a tourism perspective, people who had never been to WSM before will certainly return to the town because of their visit to Dismaland.

The Banksy exhibition in Bristol in 2009 created a huge cash injection in to the city's economy in terms of hotel and restaurant bookings and retail, and Banksy was lauded for it at the time. I hope Dismaland will inspire local young people in WSM politically, socially and artistically.

Q. Do you think Dismaland could prompt more subversive or counter-culture events? Or is this really something only someone like Banksy could pull off?

"Counter-culture tourism, events and attractions pop up fairly widely now. I do think Banksy has a unique approach to 'art with a message'. His work stands head and shoulders above the rest in terms of impact. One of my favourite Dismaland pieces was Banksy's large painting depicting a woman applying suncream in the shadow of a giant wave. It's a neat message i.e., What's the point of battling nature with suncream when we already created the Tsunami?"