The crowd went wild for the

"This should win the Turner Prize." Brian Eno

In summer 2014 I was asked to help raise funding for Andrew Logan's 13th Alternative Miss World competition, which celebrates the art of dressing up and self-liberation.

This flamboyant event has a seriously outrageous reputation, and with Grayson Perry hosting it, in one of the most amazing venues in London, I had a lot of responsibility on my shoulders...

Without a doubt this is my favourite crowdfunding project which I've worked on so far. Working with Dominic Norman-Taylor at Lumen London we raised a staggering £21,270 through ticket sales, Tshirts, DVDs, programmes and Andrew Logan jewellery, in one month.

After years of box ticking and form filling to raise funding the traditional way, I was utterly hooked on a cocktail of online funding and social media. 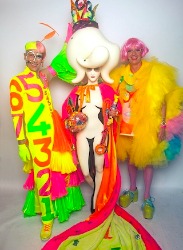 Andrew Logan and Grayson Perry with the Winner 2014 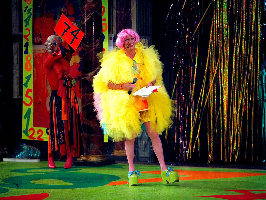 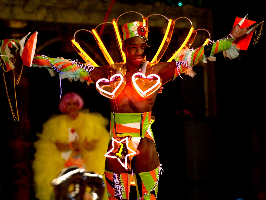