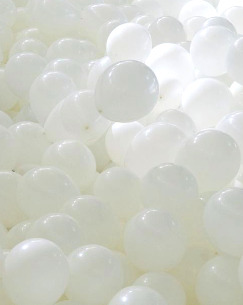 The controversial touring hit exhibition 'Martin Creed Works' which launched at Southampton City Art Gallery in 2000 led to Creed's nomination for the Turner Prize, which he won in 2001.

I managed a team of volunteers to create Creed's now internationally renowned interactive room installation 'Half the Air in a Given Space', for which we inflated some 2000 x 16" balloons.

Many visitors and local press were incensed by some conceptual pieces in the show, including Creed's thumb-print in blu-tack stuck on a wall. My job, on more than one occasion, was to replace the blu-tack when schoolkids removed it, to the delight of the local journos!