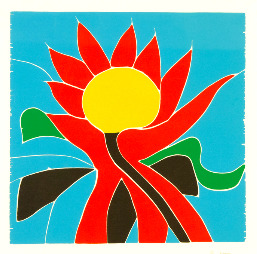 In 2005 I worked with Philip Sutton RA (b.1928) and his daughter, Rebekah Sutton, to create a beautiful exhibition, 'Philip Sutton Woodcuts 1962-1976' and a catalogue for the show, in partnership with the Royal Academy in London. It was a great experience to visit Philip's studio to select the prints, which were as crisp and colourful as the day he made them.

Craig Ashley, Assistant Curator at the Royal Pump Rooms photographed the original prints for publication. The book is distributed by Thames & Hudson.