I worked closely with Stephen Farthing RA to curate this beautiful exhibition in the vast, top-lit galleries of the Royal West of England Academy in Bristol. The show comprised large paintings made by the artist over a period of thirty years.

Stephen is a fascinating artist who has held many different positions in the art world, including the Rootstein Hopkins Research Professor of Drawing at UAL, London. His work is not easily defined - and is not obviously comparable with others. Much of his work is research-led.

I interviewed Stephen at his studio in Pimlico, shortly before the exhibition, for 'Art' magazine. He talked extensively about his thought processes behind his work.

"I probably spend the greatest number of hours actually working on big paintings. Somewhere in the back of my mind, I'm always asking myself whether something is or isnt a painting. I look at the world completely as raw material for a painting...

What I'm doing a lot of the time when I paint is to wonder what kind of veil people are looking through at my work. That veil is the knowledge the audience brings to the picture and what I try to slide in front of them before they see it."

The biggest painting in the show was Farthing's 'The Atlantic' (pictured above), a vast abstract seascape, 30' long, which has to be carefully rolled for transition.

"That painting, which is special to me, was informed by six years of commuting across the Atlantic ... at least one return trip every month. Some of it I imagined, some of it came from looking out of the plane’s windows, all of it derived from a love of painting. So, yes, it is autobiographical, but, more importantly, it is a celebration of the craft of painting." (From the artist's website)

Stephen lives and works in London and New York. 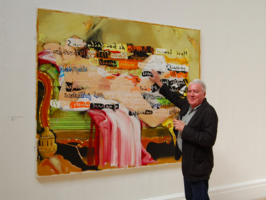 Stephen Farthing with The Back Story: Boucher, 2009